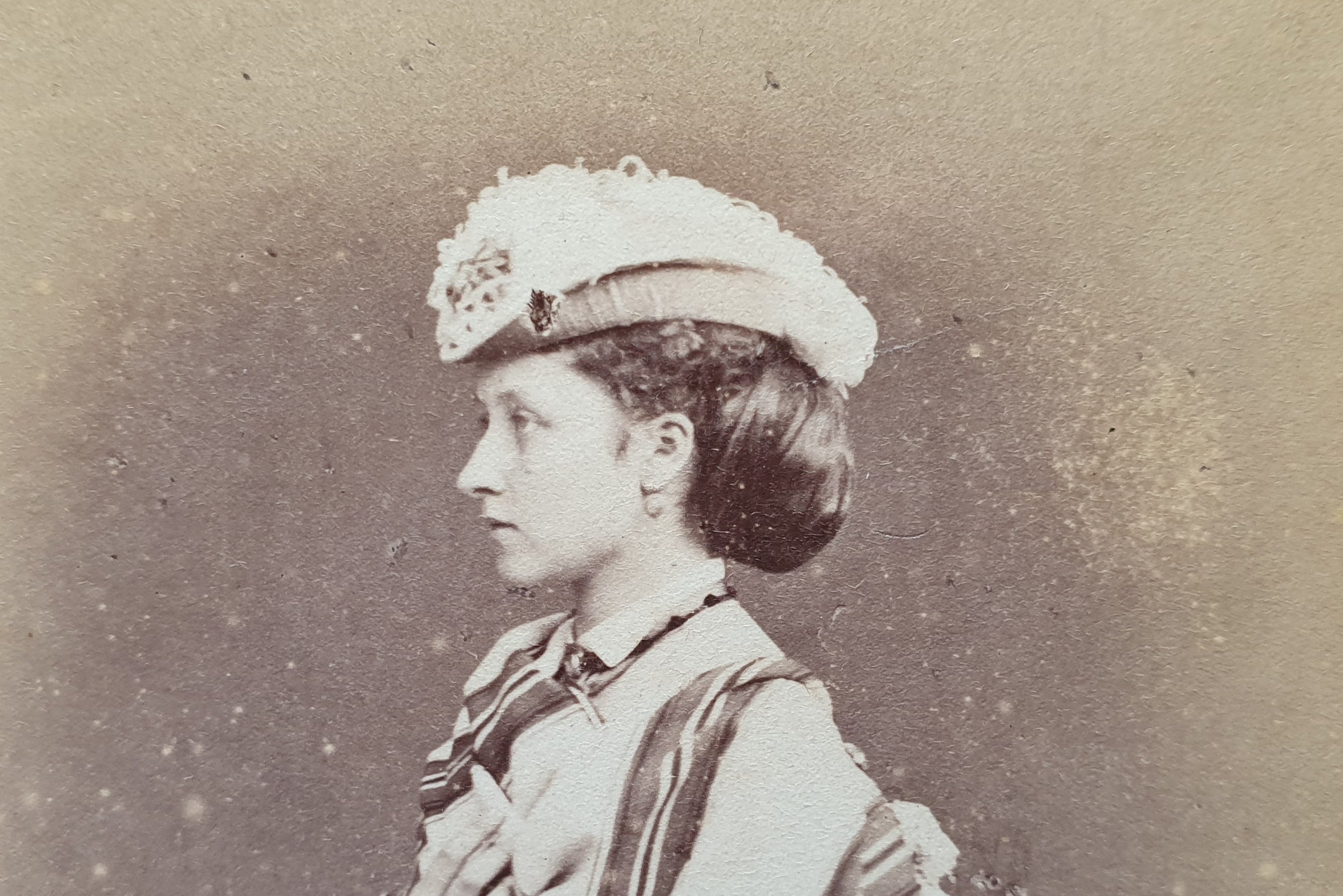 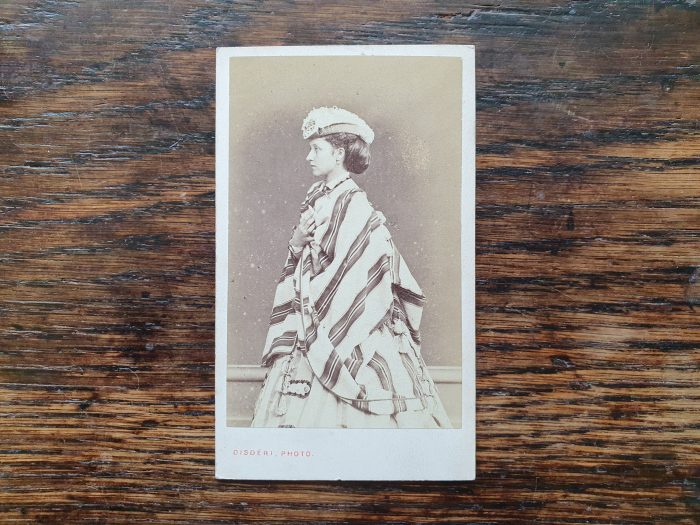 I picked this photo up a few months ago from someone who originally bought it from the estate auction of the late Duchess of Roxburgh who died in 2014. Her family a few generations before had been close friends of the Royal family during Queen Victoria’s reign, meaning this photo (along with several others) were likely a gift from the Royals themselves. The photo itself is sharp, detailed and in fantastic condition considering its age. My estimate is that it would have been taken in about 1861 as Princess Alice is about 18 years old here. It quickly became a precious possession of mine and I recently found a similar one in the National Portrait Gallery (NPG) but not in as good condition as this. The reason for this photo’s high quality can be attributed to the studio who took it.

As previously mentioned, the Carte de visite (CDV) was patented in Paris by photographer André Adolphe Eugène Disdéri in 1854, who’s novelty design quickly spread throughout the world. According to a German visitor, Disdéri’s studio became “really the Temple of Photography – a place unique in its luxury and elegance.” Over the following decades tens of thousands of small CDV photography studios appeared across the globe and each printed their own logos on the back of their cards as advertising. This card of Princess Alice however is from one Disdéri’s own studios. He only had two, one in Paris and one in London. I assume this CDV of Alice was taken in the London one, but it’s highly likely, especially being Royalty, Disdéri would have taken the photo himself which is a wonderful thought!

Who was Princess Alice?

Alice was born on 25th April 1843 at Buckingham Palace, the third child and second daughter of Queen Victoria and Prince Albert and is the maternal Great Grandmother of Prince Philip, the Duke of Edinburgh. Her education included practical activities like needlework and woodwork as well as the languages of French and German. When her father, Prince Albert, became fatally ill in December 1861, Alice nursed him until his death. Following his death, Queen Victoria entered a period of intense mourning and Alice spent the next six months acting as her mother’s unofficial secretary. Princess Alice married the German Prince, Louis of Hesse in 1962 but her life in Darmstadt was unhappy as a result of impoverishment, family tragedy and worsening relations with her husband and mother. However, she spent as much time in Hesse as possible to familiarise herself with her new surroundings and even took art lessons from the court painter Paul Weber.

Later, Alice showed an interest in nursing. When Hesse became involved in the Austro-Prussian War, the heavily pregnant Alice devoted a lot of her time to the management of field hospitals. She noted that the care conditions for wounded soldiers was very poor and she founded the organisation, the Princess Alice Women’s Guild or ‘Alice-Frauenverein’, the aim of which was to train nurses. They quickly took over much of the day-to-day running of the state’s military hospitals due to their success. It was there she became friends with Florence Nightingale who, like Alice was an advocate for the advancements of modern medicine. 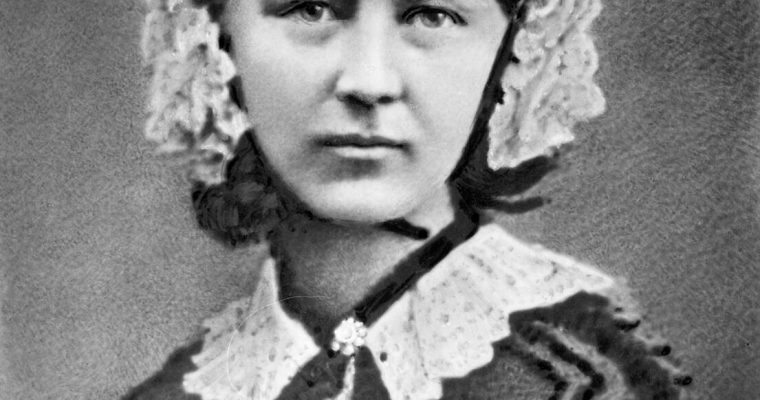 Alice had 7 children and loved them all dearly however tragedy befell her in 1873, when her youngest son, Friedrich, died. Alice never recovered from ‘Frittie’s’ death, writing to her mother two months later, “I feel lower and sadder than ever and miss him so much, so continually.”

A few years passed and Alice developed a friendship with the theologian David Friedrich Strauss. He was a controversial figure at the time and published papers arguing that the miracles of Jesus were nonfactual myths. Strauss also offered Alice an intellectual companionship that her husband was not equipped to provide. The friendship flourished and Alice even introduced Strauss to her sister Victoria and her brother-in-law Frederick.

By 1978 Alice had 6 children; Victoria, Alix, Marie, Irene, Ernest & Elizabeth. In late 1878, however the household fell ill with diphtheria. Marie became seriously ill in November, and Alice was called to her bedside, but by the time she arrived, Marie had choked to death. A devastated Alice wrote to Queen Victoria that the “pain is beyond words”. On Saturday 14th December, on the 17th anniversary of her father’s death, Alice had become seriously ill with the diphtheria herself. Her last words were “dear Papa” as she fell unconscious at 2:30am and she died just after 8:30am. She was the first child of Queen Victoria to die aged just 35. Writing in her journal on the day of Alice’s death, her mother the Queen, shocked by grief, wrote to her eldest daughter Princess Victoria, “My precious child, who stood by me and upheld me seventeen years ago on the same day taken, and by such an awful and fearful disease…She had darling Papa’s nature, and much of his self-sacrificing character and fearless and entire devotion to duty!” Princess Victoria expressed her grief to her mother in a 39-page letter response, and deeply mourned Alice, the sister to whom she was closest. 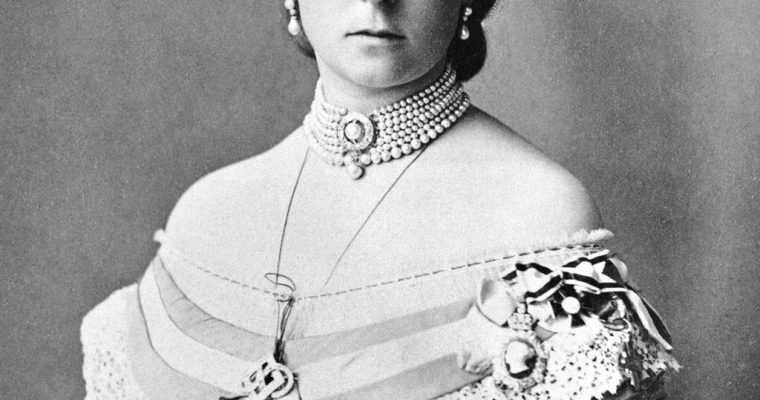 In her short but well spent lifetime Alice founded many organisations including the Alice-Hospital in Darmstadt in 1869, to treat the city’s sick and wounded. The Princess Alice Society for Women’s Training and Industry, for the purpose of educating women, and the Princess Alice Women’s Guild, an organisation devoted to training nurses. Alice’s life was tragic but meaningful and I think she’s a role model who we should still be looking up to today. She was clever and kind, strong and adept, both physically and mentally. She was a caring and loving as mother and spent her life learning and teaching. Using her influence to do as much good as she could, Alice accomplished so much in her short time and when you think about it, this really wasn’t that long ago and I believe her story should be more widely known.

Post Views: 333
Author: samuel thomas
Filed Under: From My Collection