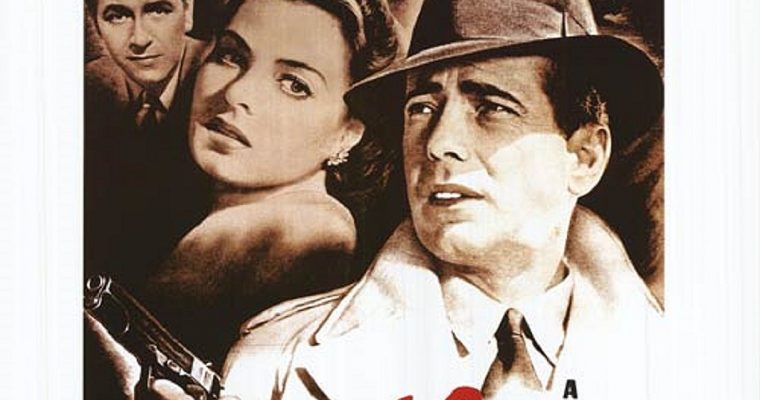 In my opinion the Casablanca movie poster is one of the greatest movie posters of all time. Designed by Bill Gold for the 1942 film, it is one of Hollywood’s most memorable posters. It’s a masterpiece that combines illustration and typography. I love the arrangement of figures with Ingrid Bergman and Humphrey Bogart central to the scene. Bogart’s looking off into the distance, poised excitingly with his gun held up and ready to act, meanwhile Bergman is looking just past the camera, but close enough to it that she invites us, the viewer, into their world to find out just who these characters are and how their story goes. The light and shadowed tones of the illustration show the grit and mystery of the drama. There’s so much feeling and emotion etched into each character’s face.

Then comes the typography. The classic “Casablanca” scrawled large over the bottom 3rd of the poster in a brilliant red script. No-one will forget the name of your film when you present it like that. A fun fact about the 3 first names of the actors at the very top of the poster is that “Humphrey”, “Ingrid” and “Paul” were actually written in Bill Gold’s own handwriting.

Now we’ve talked about the poster, let’s discuss the legend behind it, Bill Gold (1921 – 2018). Gold was THE film poster designer from the 1940s – 2000s. His iconic work spanned 60 years! Just some of his prolific poster’s include that of: A Clockwork Orange, The Exorcist, Dirty Harry and My Fair Lady. Not a bad legacy.

In an interview in 2013 Gold revealed that in his original drafts for the Casablanca poster he thought the “line-up of characters would be interesting enough. This was one of my first posters. My initial thoughts were to put together a montage showing all the characters depicted in the film. They appeared to be an interesting ensemble. Something was missing however and I was asked to add some more ‘excitement’ to the scene. I added the gun in Bogart’s hand, and the poster suddenly came alive with intrigue.”

I became a huge fan of Gold’s work at the age of about 14 when I first saw this poster alongside 3 other film posters, on my Media studies classroom wall at school. I completely fell in love with the design and sad opposite it without knowing anything about the film or the designer. A bit of searching later I unearthed a giant of both the film and graphic design world. As films take from reality, reality has increasingly been taking from films and now they’re visually mixing together, with Bill Gold’s style influencing both today.

I actually wrote to Bill Gold in February 2018 and told him how much his design had impacted my life and helped pave the way for the designer I want to be. His daughter Susan Gold replied saying…

“Thank you so much for your beautiful email. I can tell that it is beautifully written from your heart. I love that you love Bill’s work and that he has inspired you with following your passion. That’s so awesome. Bill used to say…when you follow you passion, your dreams will come true. Unfortunately, Bill has dementia and might not be able to follow and understand your email, but I will definitely read it to him and explain to him that he helped to guide you in the direction your taking.”

Sadly Bill died just 3 months after he heard my email, but I still feel overjoyed that he got to hear how much I admired him and his work and that he was inspiring the next generation of designers.

It’s phenomenal how Gold managed to capture the emotion, grit and plot of Casablanca in one, single, beautiful poster. And yes. I have a copy of it on my bedroom wall as even if you forget its connection to the film, it’s still an amazing piece of stand-alone graphic design.