I Was In The Vodafone Christmas Advert With Martin Freeman

I WAS IN THE VODAFONE CHRISTMAS ADVERT WITH MARTIN FREEMAN 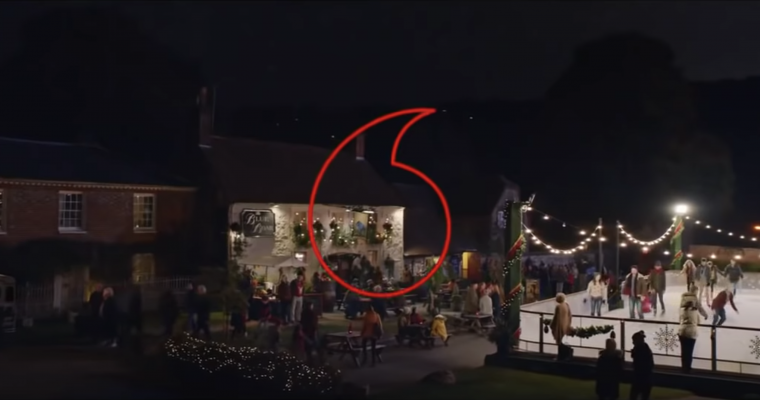 This is Vodafone’s Christmas advert from 2018, starring Martin Freeman. Vodafone decided to shoot their film in my picturesque home village of Aldbourne, in Wiltshire from Thursday 4th to Saturday 6th October. This posed a wonderful opportunity to observe a live film set in action and I even got to be an extra on screen! The video is called “Glide Through Christmas” and can be seen on Vodafone’s Youtube Channel by clicking the image above.

A week before the shoot, Vodafone spent £20,000 building a huge ice rink in the centre of our village and they decorated the surrounding houses and pub of the village green to make it feel like Christmas, even though it was October. The first night was really incredible, lots of villagers turned up at 6pm when filming started to see what was going on (myself included). There were about 20 cast and crew working on the production; director, editors, sound and lighting technicians, camera crew, make-up artists, marketing people from Vodafone, professional skaters and more. It was brilliant seeing them all working together on the production. 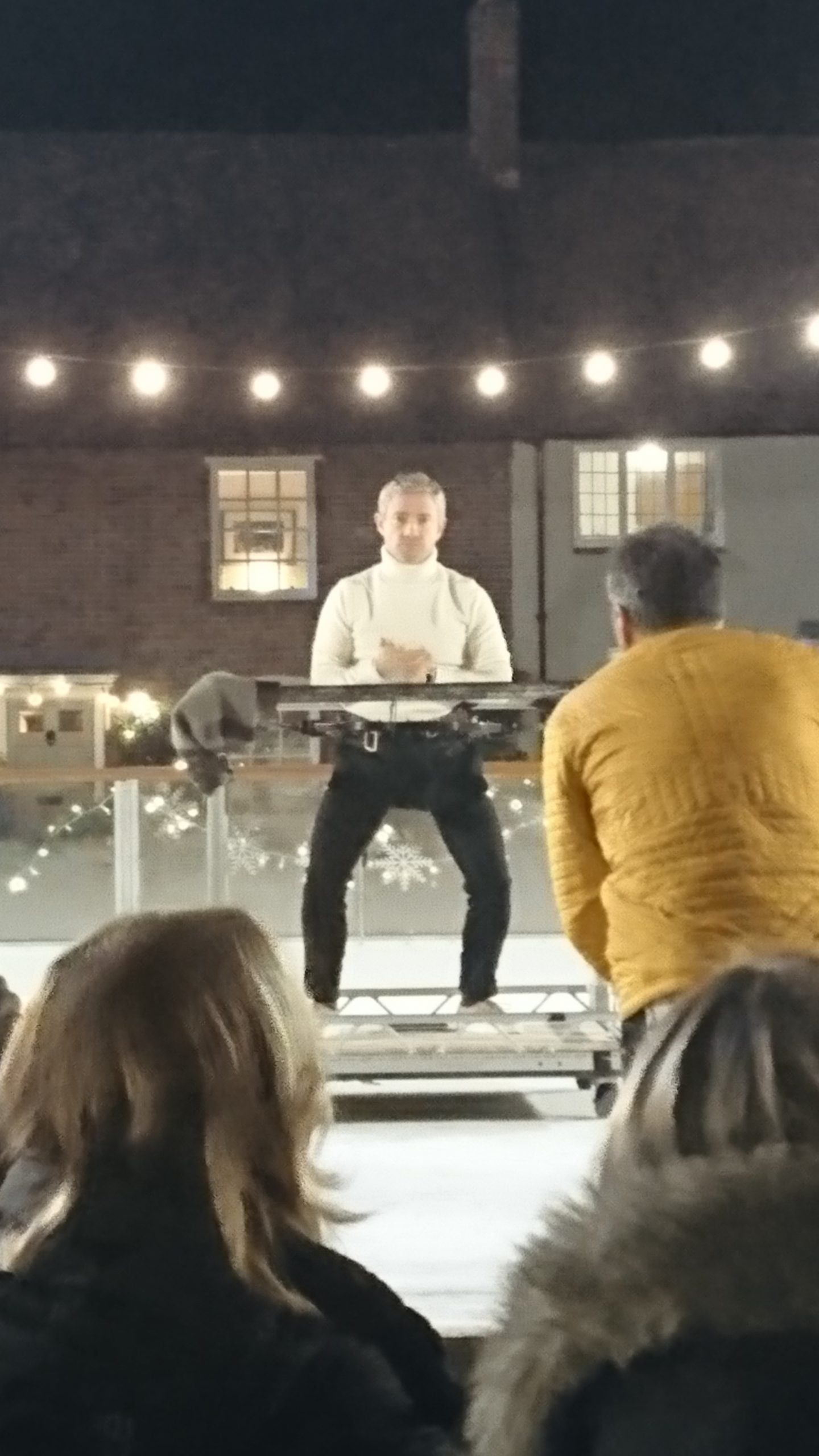 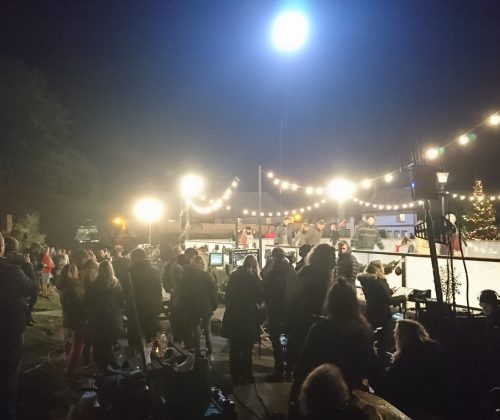 We didn’t know what the advert consisted of, but we thought there would be a skating, dream sequence somewhere as Martin had to skate alone on the ice in once scene. For the skating parts, they couldn’t have Martin Freeman do it because firstly, he doesn’t have the skills required and secondly, he is too valuable. So, they had the British Champion No.1 and No.2 skaters to do the routines instead. The British No.2 skater was about the same height as Martin and looked similar too, so they put him in a wig and dressed him up as a body double. Then he performed a pre-rehearsed routine on the ice 10+ times and it was captured using a huge £500,000 camera crane to get high angle shots of the ice rink while he skated. He danced to the tune “Beautiful Dreamer” by Roy Orbison, which we assumed would be the backing track of the dance in the advert. The routine was quite beautiful and it was the first time I’d seen professional ice skating live too.

Then Martin Freeman arrived and some crew placed him into a rig that could skate along the ice, allowing him to spin around and make it look, from the top half, as thought he was actually skating. They had people to push Martin around and film close up shots using a camera fixed to another skating dolly. During this time, they kept reviewing the professional ice skater’s routine and got Martin to synchronize the movements his movements with the professional’s. This was ok at the beginning, but I noticed the director wasn’t good at his job as he kept asking Martin to “do it again” with not direction as to how improve his movements. This showed as Martin looked a bit frustrated at times, having to be in the skating harness for hours at a time. Martin’s face acting was one thing he did have full control over and it was wonderful. He really expressed a cheeky joy and love of ice skating, it was great to watch. 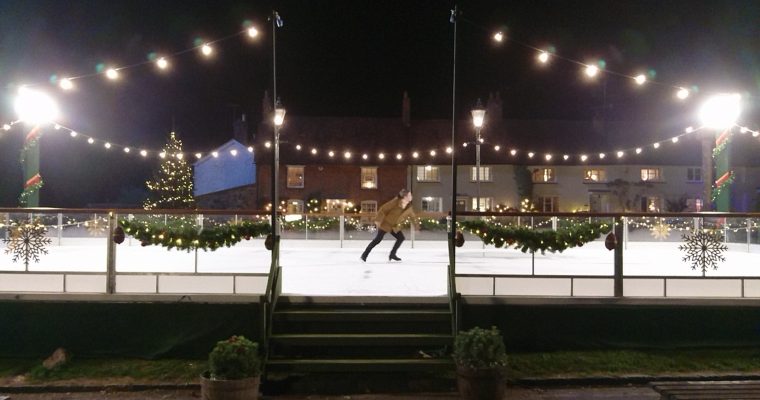 By about 2am everyone who wasn’t working on the production had gone home to bed, but my Dad and I stayed, because although we were very tired, it was so intriguing to watch the dynamic of a film crew working together. As I hope to design graphics for TV and film, I will need to work with crew on sets, making sure the graphics are placed correctly and working with the actors who will interact with the graphics I’ve made. It was also lovely seeing the ideas people behind the advert on set, working with the director and editors to start composing a rough cut of the ad with the footage as they had just captured. The shoot was a full 12 hours, 6pm to 6am. As dawn broke, they filmed a final take, wrapped up production and packed their kit away. We went home and everyone on set was impressed that we’d stayed for the entire 12 hour shoot after a full day as most of the crew had gotten up at about mid-day, but it was so interesting, we couldn’t leave.

Next evening, at 6pm, we returned for the second day of filming and the crew we’d spoken to the day before greeted us and we walked up and prepared for the second night. They told us that on this second night, the extras would be on set and we casually asked if we could be in the advert too. One of the really lovely concept creators said “Yeah, I’ll go and check” to see if would be ok. He came back a few minutes later with a kind production manager who had noticed us the day before. She said because of our dedication staying for the entire shoot the previous night, my Dad, Mum and I could be extras! She quickly printed contracts for us to sign, which stated that they would pay us “£1” for our work to bind us financially, so we would not disclose any information about the advert before it was released etc… Having never acted or signed a film contract before it was very exciting, even though I was just an extra in an advert. 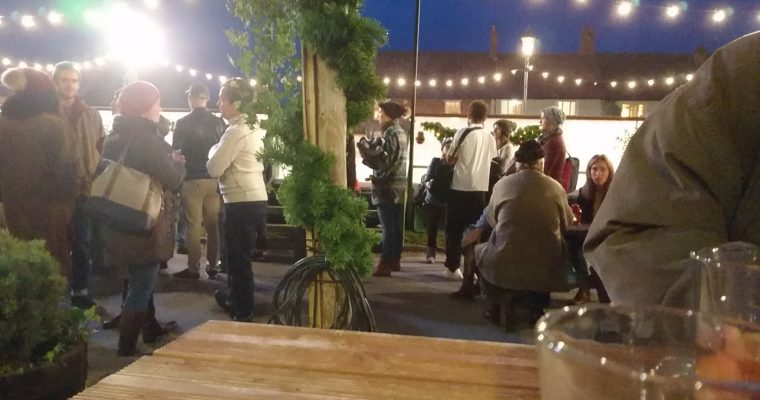 Soon the extras started turning up and I had some lovely conversations with a Canadian man who’s been in 100s of ads and does it for a living. Also, an Asian woman who’s been an extra in several block-buster movies with Tom Cruise. These people were experienced and we were novices, which felt a bit intimidating. Before shooting the extras were all positioned around the exterior set. We were on the table directly behind the main scene of action where Martin greets his family, and I had a walking role, from the door of the pub to my seat at the bench behind the action. We did the same take over 20 times before the director was satisfied.

Next came a lot of standing around in the freezing cold, waiting to be needed again. We were needed for a later shot where Martin was back skating on the ice, and we sat in different positions for that, but our job as extras was mostly over. About 1am, all the extras went up to the church where the crew had laid hot drinks and most people slept on pews. This was a good insight into being an extra and how much waiting around there is.

During one of Martin’s breaks, I got to chat with him for a short time. I told him I really liked him in Sherlock and The Office and my Dad asked whether he managed to get a decent cup of tea, because the night before he tried to get a simple up of English breakfast tea, but no one could find any. That was a fun little interaction I will never forget. 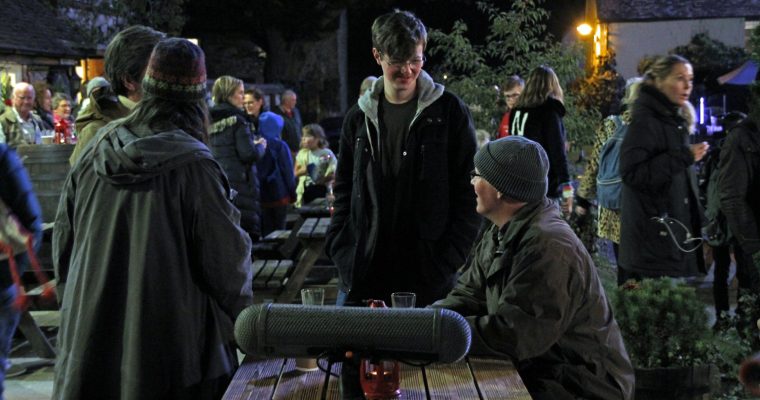 The photo above is a candid shot a friend from our village took of me on set, which I didn’t know about until a month after we shot the ad. I didn’t get bored however, as the filming was still really interesting and I got to spent some time in the warm pub, watching the filming on the monitors while I warmed up a bit. I also had a nice chat with the No.2 British skating champion, who told us how skaters struggle to get funding even though they’re world champions and they actually teach young kids how to skate for a living. He was lovely and did a great job as Martin’s double. I also chatted with the actor who played “Auntie Sue” who’s mainly does theatre.

At about 6:30am, exterior shooting ended. I helped push and load the large camera crane back into the lorry it was stored in… needless to say, I was very careful. According to some of the crew, the total amount of tech on set came to about £1,000,000, which seams crazy for a 60 second advert. The crew then recorded a final scene in the pub and we stood outside and I watched one of the audio technicians working and making sure every line was perfectly clear on his laptop. We all said goodbye and all in all, it was an intriguing, cold and exciting experience. 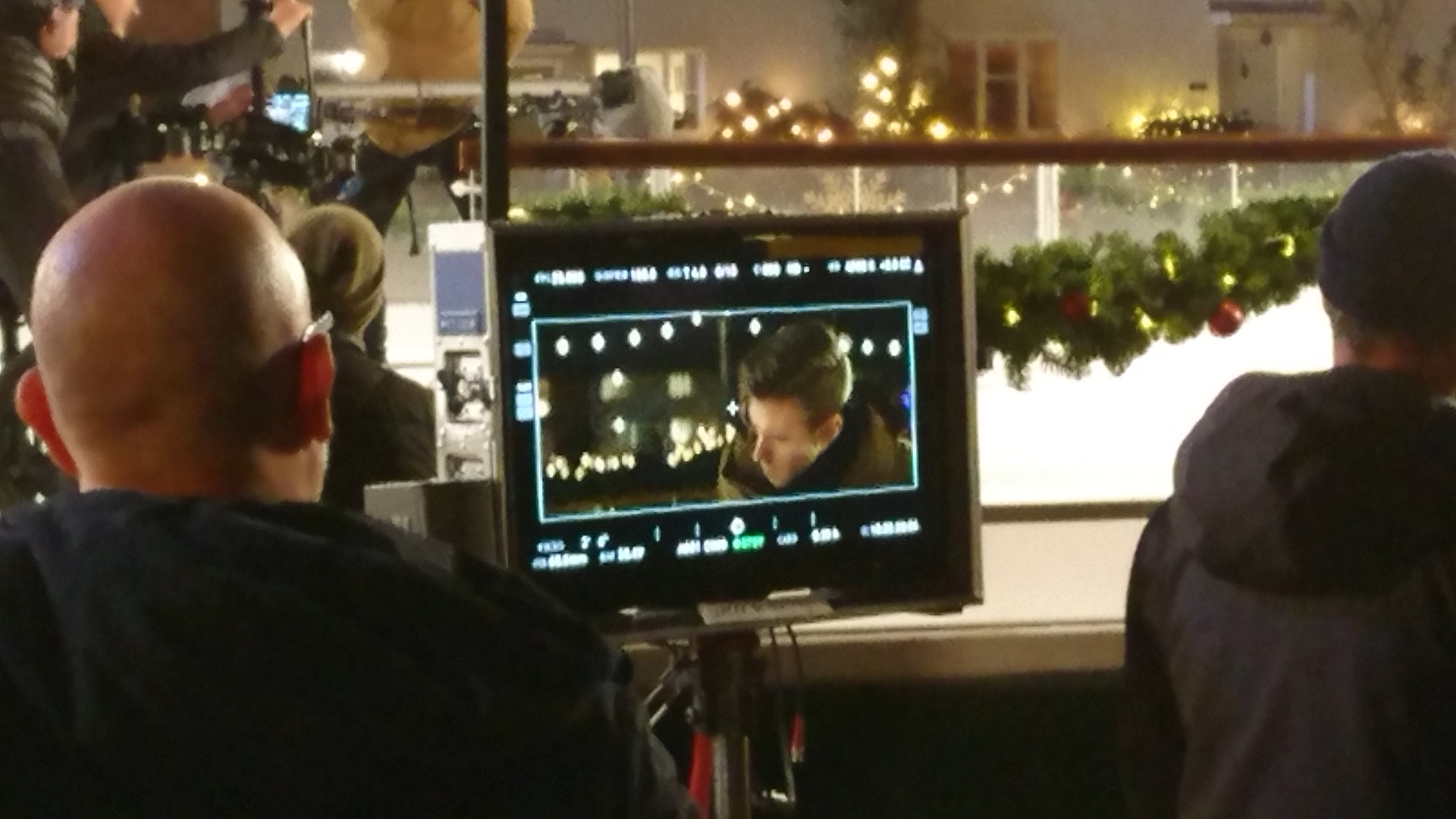 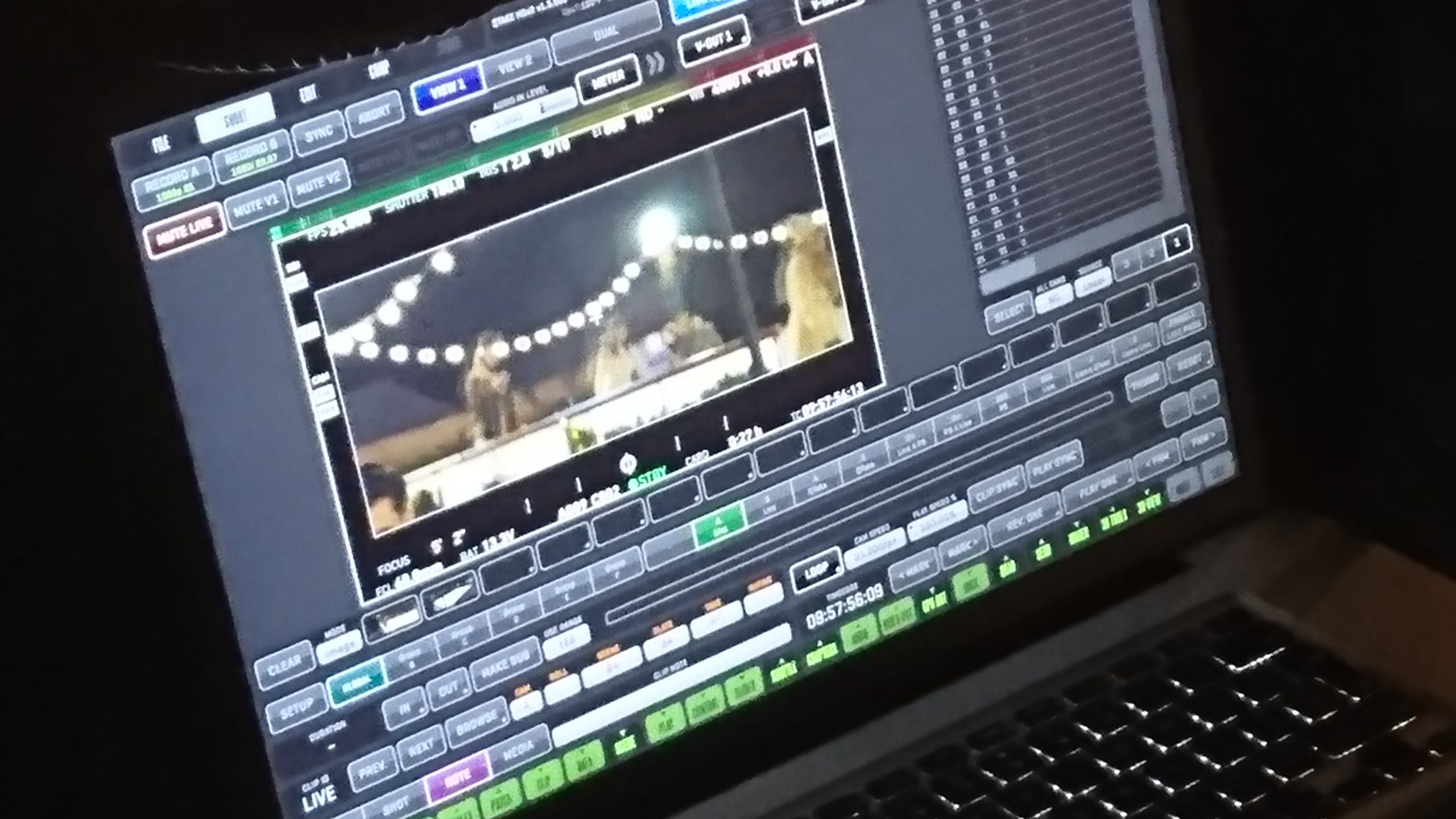 This was my first time acting and my first time on a live film set. It was a wonderful experience and really interesting watching the cast and crew interacting and making the advert in front of our eyes. In graphic design, there is a lot of collaboration and we saw that in a professional sense over the 24 hours of filming. Discussions were had, compromises were made and ideas were changed as the filming was happening. In terms of professional practice, this was quite a rare and valuable experience to have during my second year of university.

The footage was edited in about 3 weeks and the final advert aired on Youtube and TV on November 9th. I was surprised to see it up so early, but that’s Christmas adverts for you. Anyway, I actually appear twice in the final ad, first at the beginning in the establishing shot. I can be seen walking to the table and sitting down, but I am barely recognizable. Later in the video though, I get 3 seconds of screen time from 0:07 – 0:09 in the center left of the frame. You can see me chatting to my Dad and I even turn my head. It was really fun but surreal during the lead-up to Christmas to be watching TV and then see myself on the screen during the ad breaks. Although I’m proud to be in the advert, from a filmmaking point of view, the final outcome is a bit rubbish. The concept is a bit week and it doesn’t have a good narrative, or point, or anything really. But I’m in it and that’s all that matters. 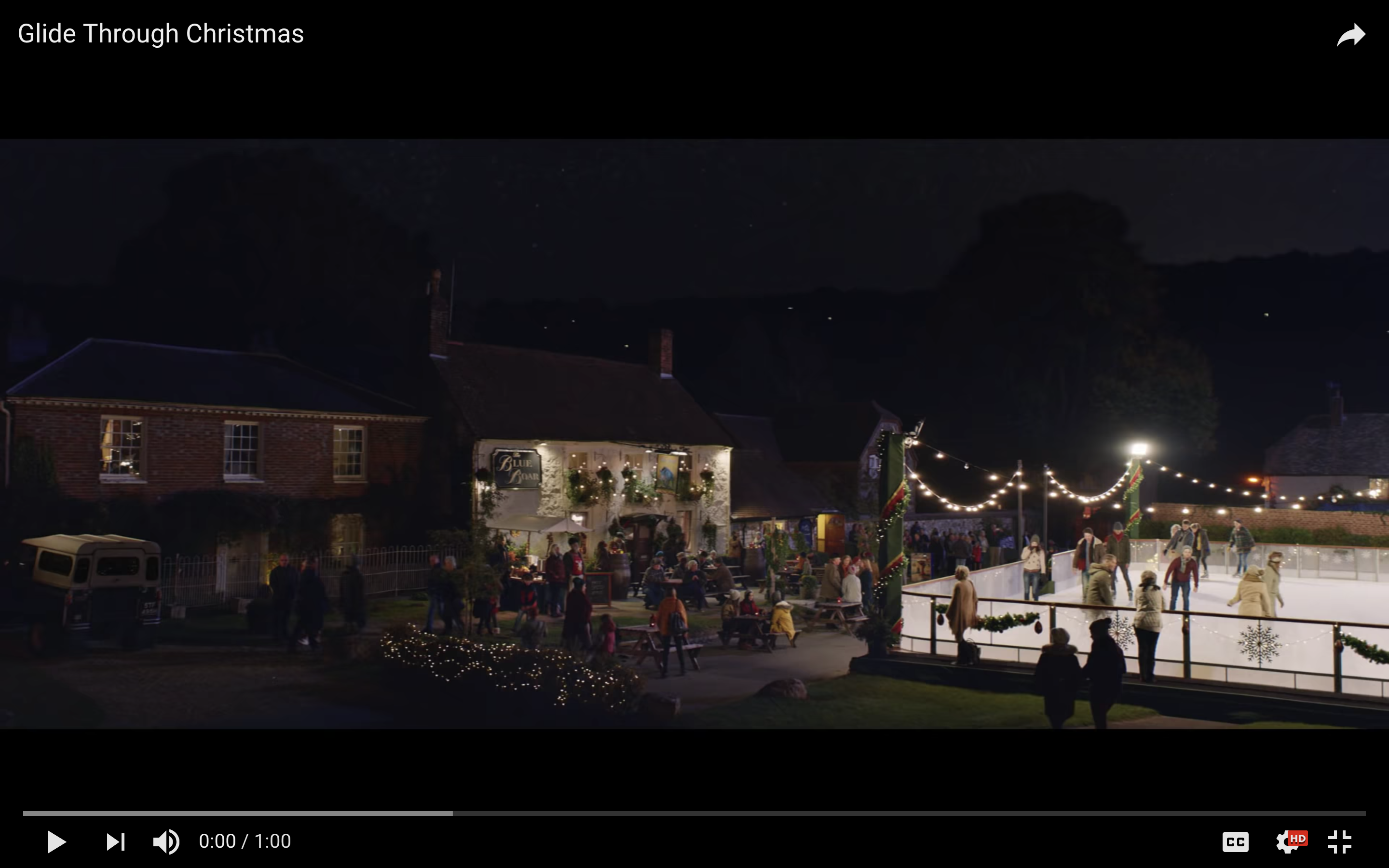 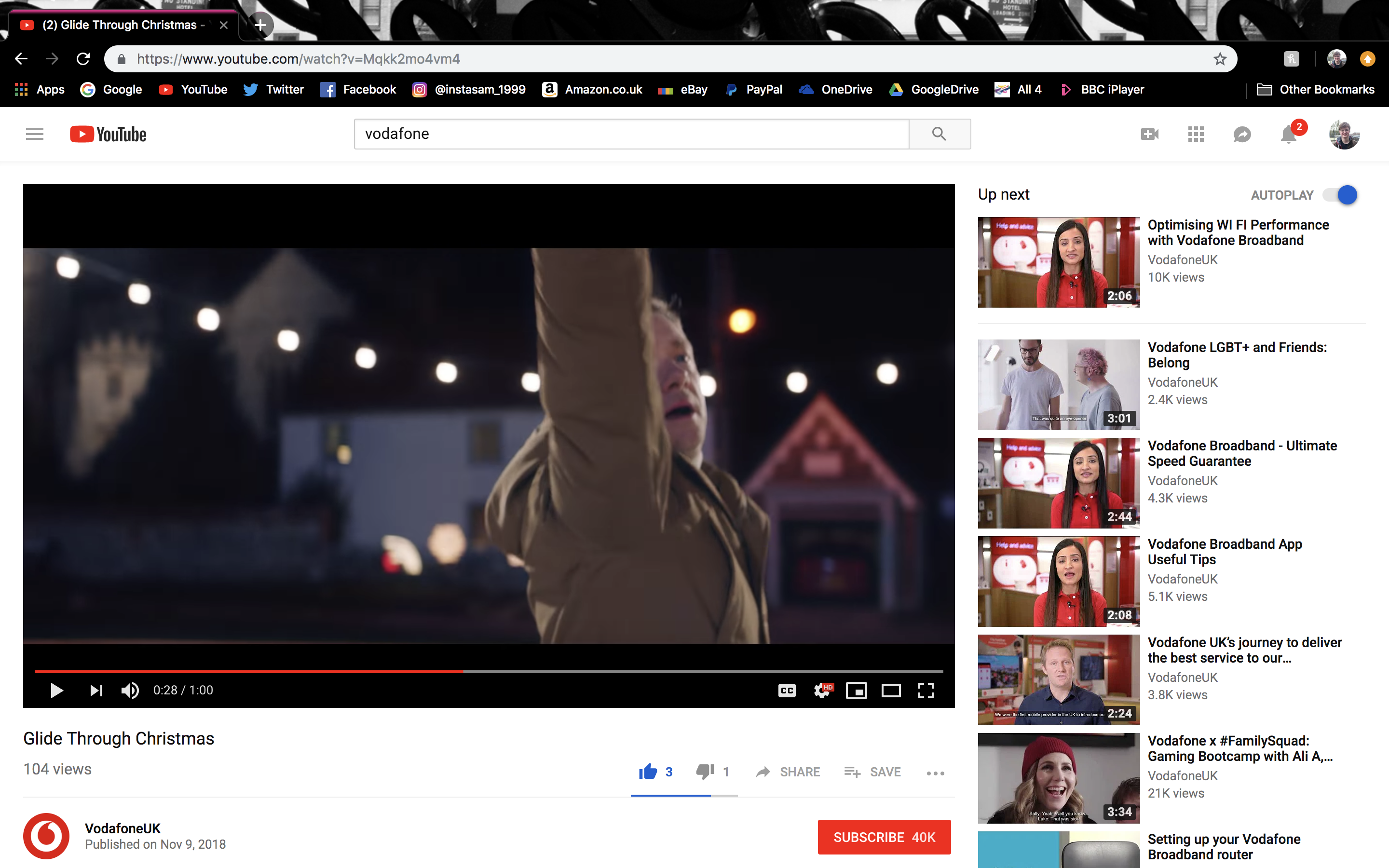 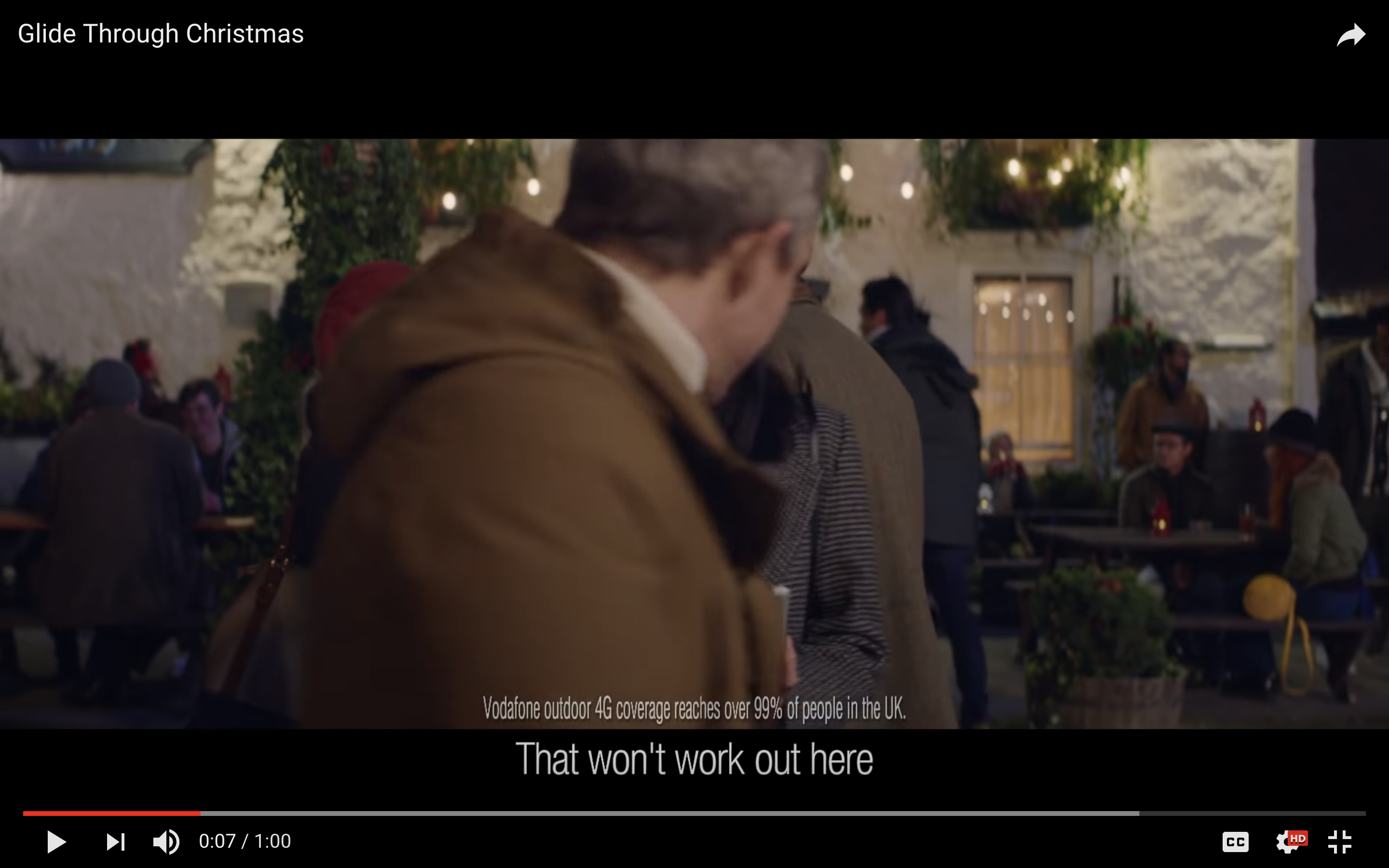 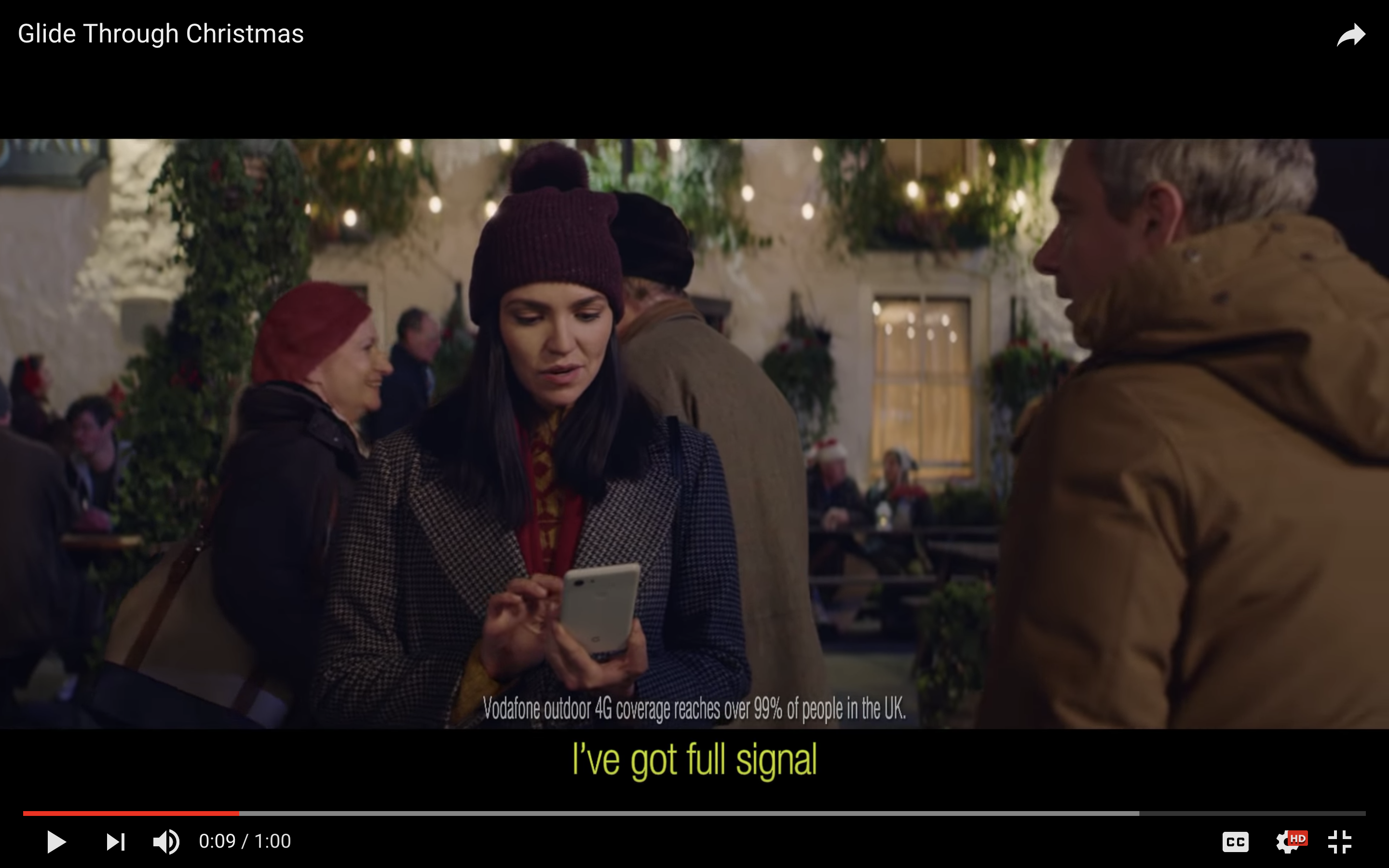