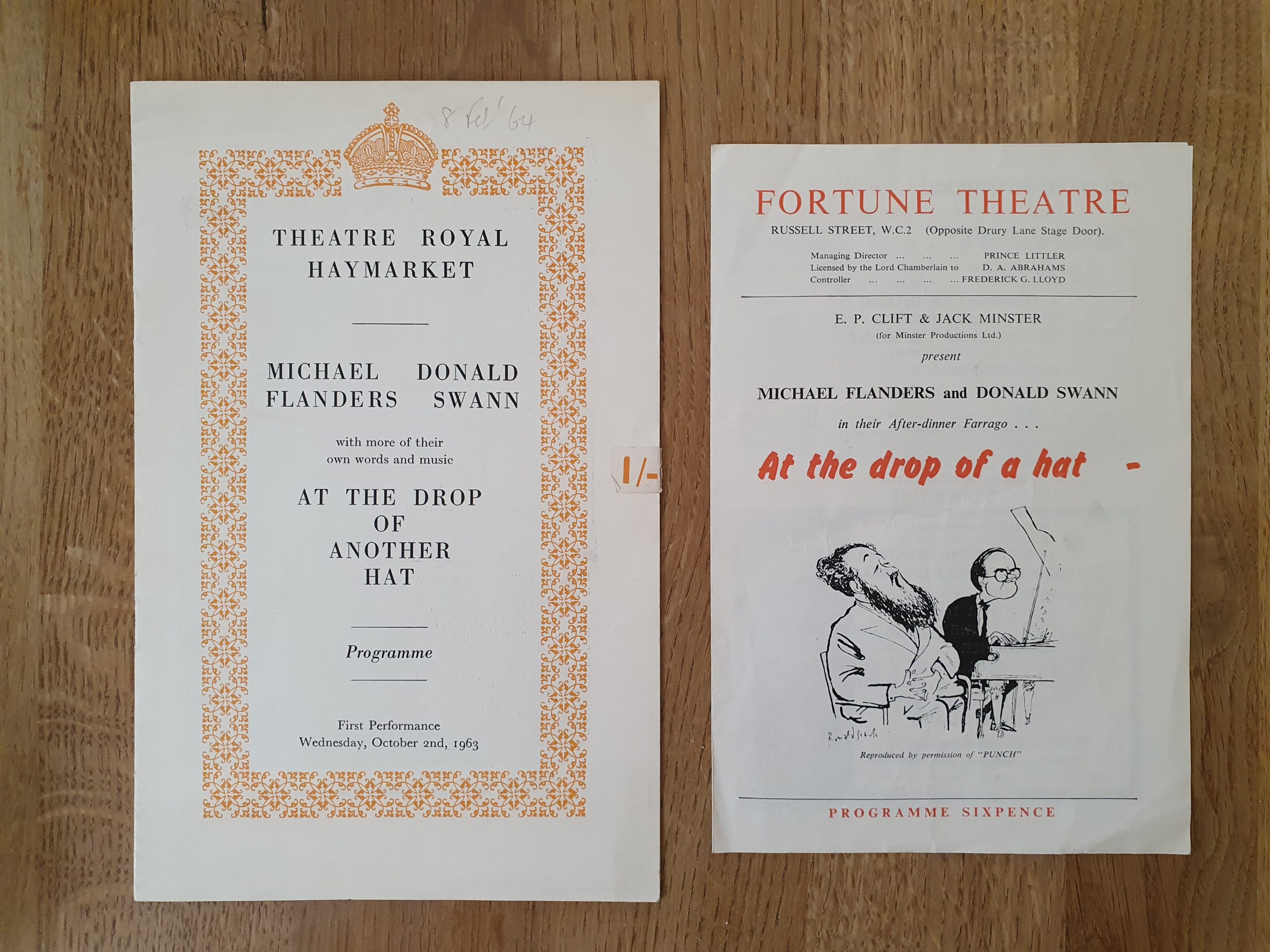 These are two vintage theatre programmes from the Flanders and Swann live shows, “At the drop of a hat” (1956 – 1961) and “At the drop of another hat” (1963 – 1967). I bought them on eBay for just a couple of pounds each a few years ago and they are wonderful pieces of ephemera for many reasons.

Michael Flanders and Donald Swann were a comedy duo who performed together as schoolboys and after school wrote songs for other comedy singers. Flanders wrote the words and Swann wrote the music. As successful songwriters they were invited to lecture on the subject at Dartington International Summer School in 1956. Flanders found that his spoken introductions were as well received by the audience as the songs they wrote. He and Swann decided to give a live show a go in London’s New Lindsey Theatre, outside the West End district, which seated about 150 people. They chose to call their show “At the drop of a hat”, an idiom which the Oxford dictionary defines as, “without hesitation or good reason”, which gives some indication as to the pair’s comedy attitude. However, they did occasionally and cleverly slip in songs about very real and serious topics. 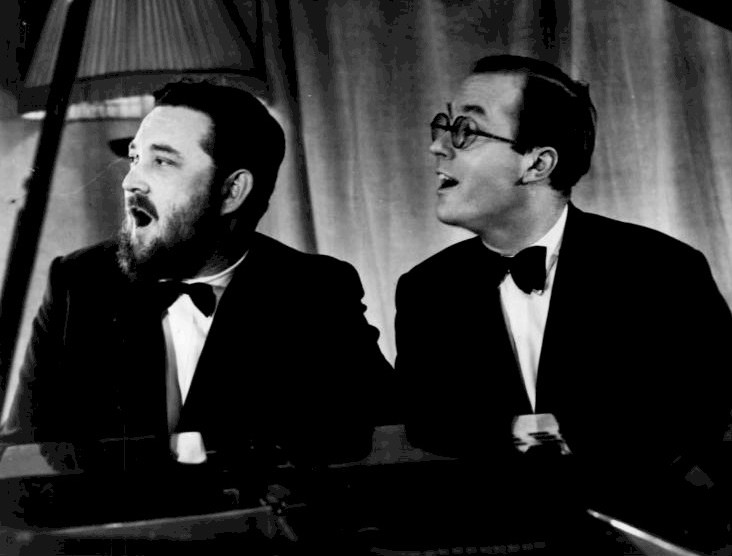 Their songs are mostly topical and almost always silly. They’d even change a few lyrics each night to entertain each other as well as the audience. Donald Swann’s mixed heritage, being born Welsh to Russian parents, provided him with a beautiful combination of musical styles to draw on. Michael Flanders’ was wit itself and connected each song with interludes of comedic anecdotes, some with topical overtones. He used his disability to his advantage on stage, by wheeling himself around, sometimes on just his back wheels, he turned his wheelchair into a wonderful prop to further aid in the storytelling and meaning of many songs. 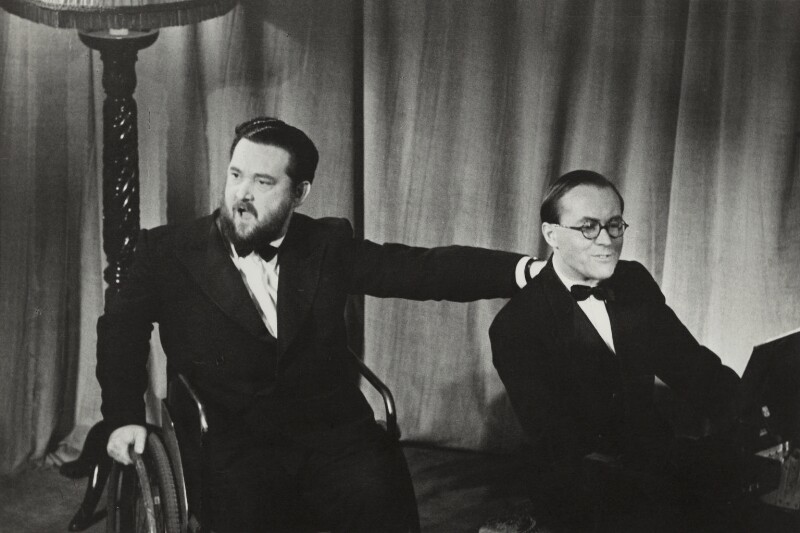 Flanders and Swann hold a special place in my heart as I first heard them at 3 years old when I got my first tape machine and my parents gave me “At the drop of another hat” on a cassette to play on it. I loved the songs so much, I barely got any of the jokes, but I thought the pair were friendly and funny and I listened to it over and over again. Aged about 7, I got their first album, “At the drop of a hat” on CD and enjoyed it just as much. Over the years as I grew up, I understood more and more jokes and a little leap of joy would come from each new connection made. By about 16, I understood every joke and could recite both albums by heart.

I bought these two original programmes in quick succession (soon after I discovered the delights of eBay in 2016) as mementos of both Flanders and Swann and examples of design from the late 1950 and early 1960s. The first programme is understated and just one sheet of paper folded in half with a crude illustration from “Punch” magazine on the cover. To save on printing costs for a fairly new show like this, there are just three lines on the whole programme printed in a light red colour, everything else is in black and white. The programme originally cost just “sixpence” (90p today). 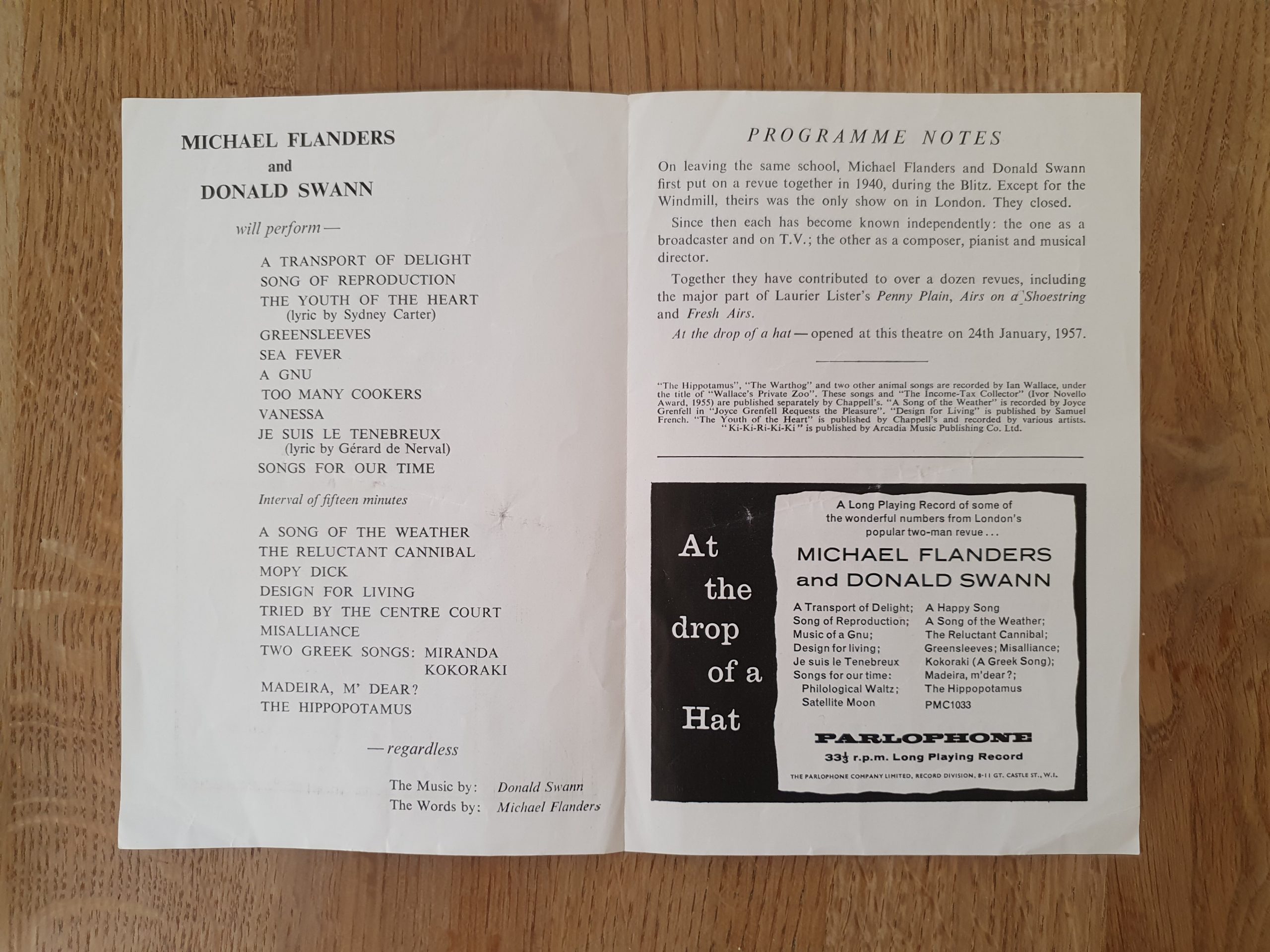 The programme for “At the drop of another hat” is a bit more impressive. After a much-loved British run and a widely successful American and European tour, they returned for their second show. This time they got a 5-leaf programme, much more thoughtfully designed, with advertisers sponsoring their show, including a “Warm Air Heating” company and a “Seafood and Steaks” restaurant. This extra content cost more to print, so this programme was also printed in full black and white, except for an elaborate orange coloured border on the front, which was the Theatre Royal Haymarket’s standard border at the time. Wonderfully, the original purchasers of this programme who attended the show, wrote the date they went at the top “8 Feb ‘64” which is awesome from my ephemera collector point of view. On the recording of “At the drop of another hat”, Michael Flanders actually directly refers to these programmes during the show, saying “these rather fanciful titles that we print on the programme bare no relation to what we’re going to sing. It’s a dead waste of a shilling.” And that one shilling (£1.70 today) sticker can still be seen on this very programme! 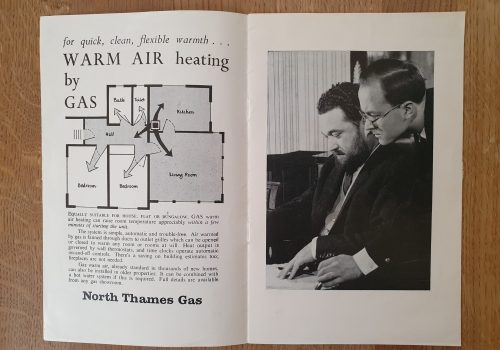 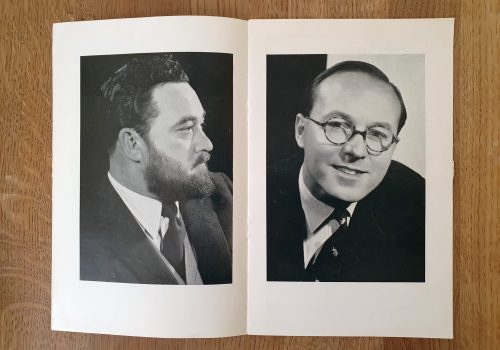 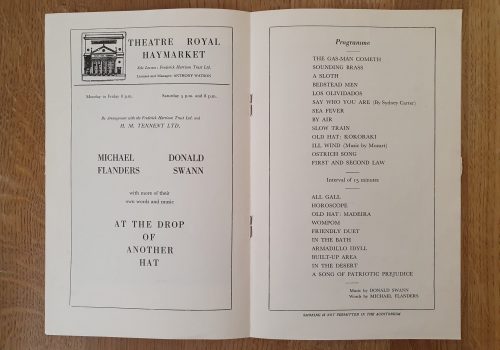 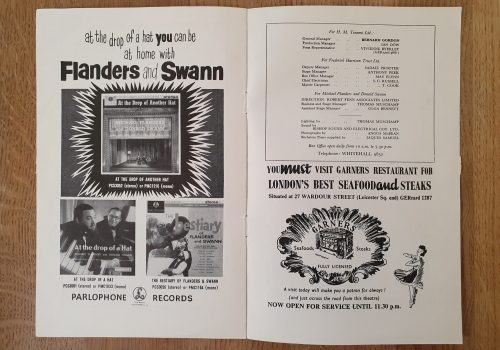 Flanders and Swann have endearing personalities and their songs are still relevant and funny today. Their music means a lot to me as I grew up with it and I’m lucky to have these two original programmes from their two famous shows. A few years later, I also remarkably found and purchasd an original, hand signed page from a signature album by the duo, which was signed at one of their Fortune Theatre shows of “At the drop of a hat” and it’s one of the prizes items of my collection. To end, here’s my favourite Flanders and Swann song. It’s a short and sweet ballad of unending domestic upheaval, called “The Gas-Man Cometh, enjoy. 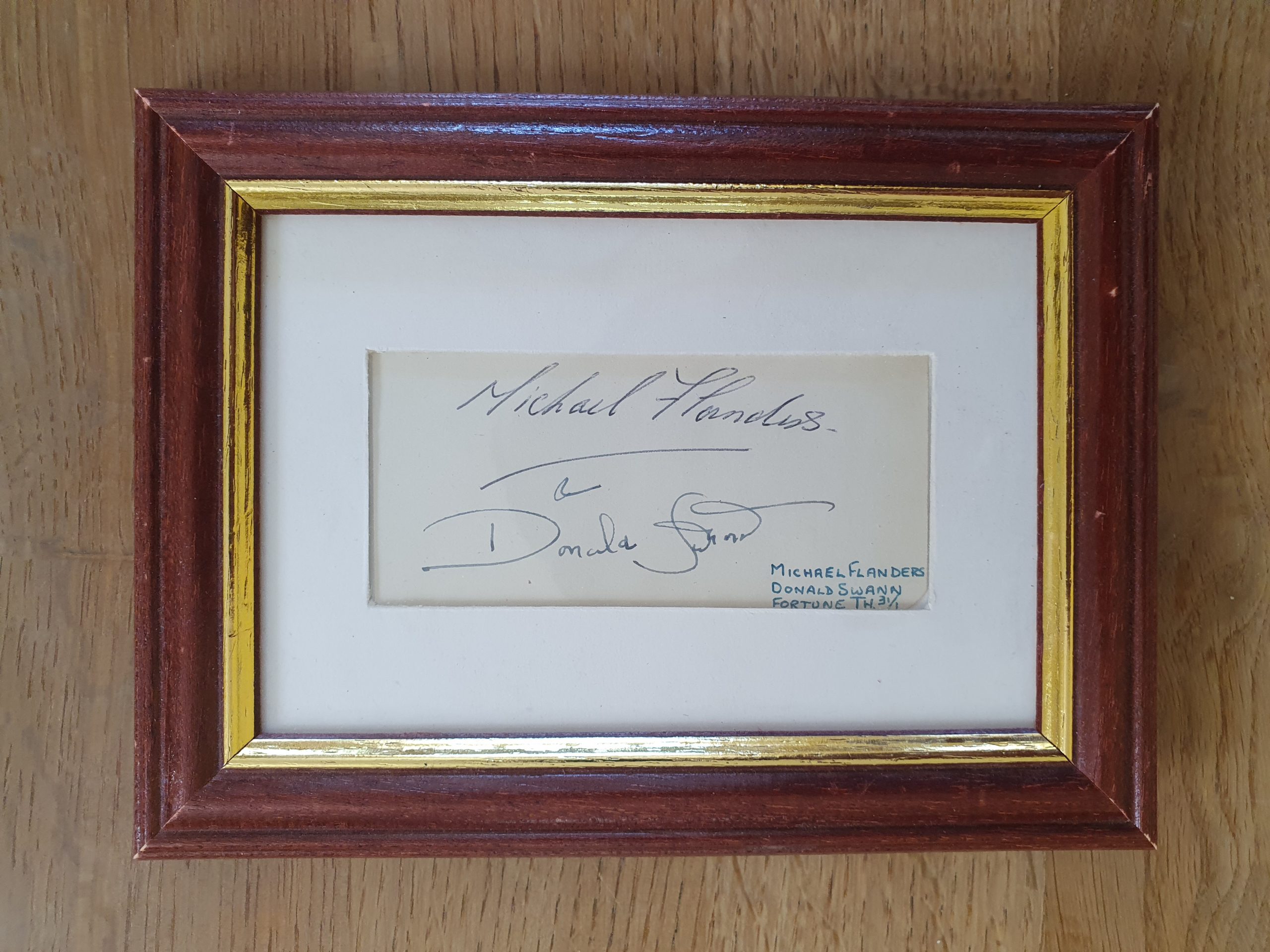 Post Views: 730
Author: samuel thomas
Filed Under: From My Collection