Filming Process of: Amelia – A Story Told With Graphic Props

FILMING PROCESS OF: AMELIA – A STORY TOLD WITH GRAPHIC PROPS 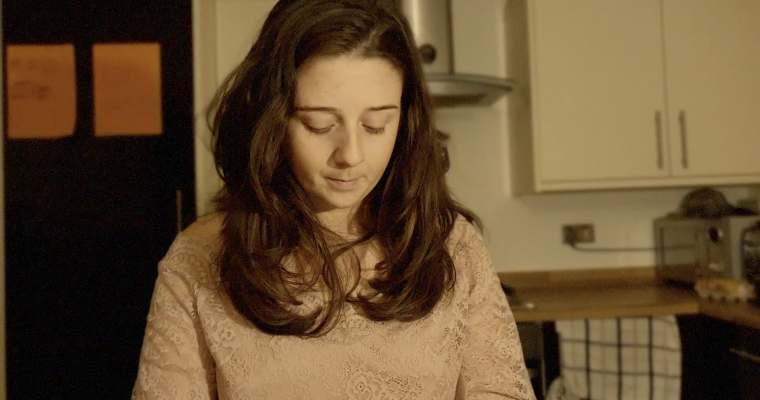 This is a behind the scenes look at the process of filming and editing my short film, “Amelia: A story told with graphic props.” This was the final stage of my 2nd self-written brief from my final semester of university earlier this year. The graphic props I made were based on a script of a young wife leaving her husband to pursue a career in fashion in Paris during the 1950s.

We filmed the video in March and I asked my actor friend Poppy to play Amelia as she was prefect for the role and I’d also photographed for Amelia’s passport. She said she’d be happy to do it which was exciting as being an actor meant I knew she’d do my graphics justice and help them come to life. For costume she wore a light pink floral top to reflect the 1950s time period.

I opted for a silent film and then place music and foley over the top. For a set, all I had was my flat but I made it work with little adjustments to placement of items and set decoration. I had help from my flatmates, fellow graphic designer Toni who acted as assistant director and drama student Stuckey who helped with lighting. I split the scenes up by location for convenience, like a director would do. 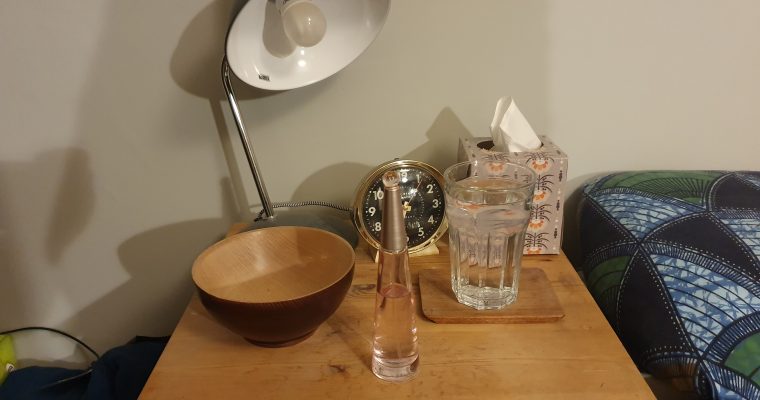 First, I filmed the scene in the bedroom, with Amelia reading her magazine on the end of the bed, I used my room as Amelia’s room. I placed the art nouveau poster on the wall so when filming Amelia from the side, it was in shot. I chose 3 camera angles for this scene; a side mid shot so we could see the poster, a front on mid shot so we could see the front cover and Amelia’s face and lastly an over the shoulder shot to show off the magazine. I used a close focus for all 3 angles so Amelia and the magazine were in shot and everything else was blurred out, allowing the viewer to focus on the action and not be distracted by the background. I wanted my poster to be out of focus because in a real film, graphic set dressing like this is often gets blurred in the background. I wanted to show I wasn’t afraid of treating my work the way it would in on a film set.

I stayed in the same location to film Amelia looking at her passport. I cleared my bed side table, leaving only things that looked 1950s and that Amelia might have had. Toni helped me with set dressing by lending me makeup products, a perfume bottle and a 1950s clock. We then rehearsed 3 shots. One of Amelia coming up to the table, another of her opening the draw and taking out the passport. The final one was an over the shoulder shot of her opening up the passport and looking through it. I kept them tight so I didn’t get anything in shot that wasn’t 1950s such as plugs and cables. 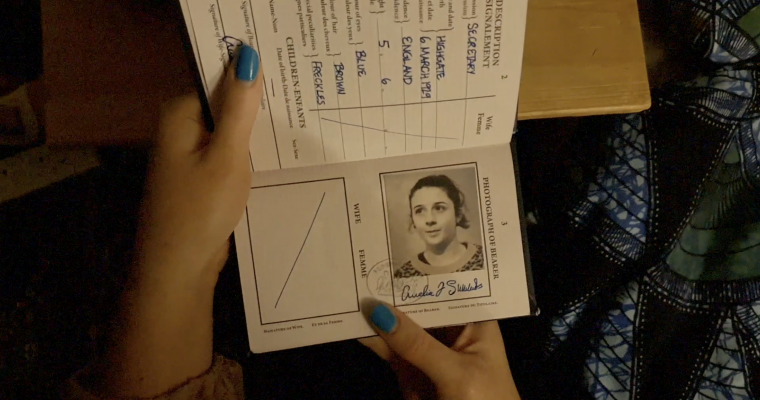 The second set was the kitchen / dining area. First, I filmed Amelia drawing her bird comic page. I shot footage of her picking up pencils and switching between shades of blue which all added to the realness as I was the one who really drew the page. I shot a front view to capture Amelia’s expression and an over the shoulder shot to see the graphic being drawn. For the front view, I framed the shot so Amelia was on the left of the screen, not central and sat her on the far side of the big sofa, all to convey her loneliness.

Lastly, we moved over to the kitchen area for the final shot of Amelia reading her letter to Tristan and then leaving. I first shot an over the shoulder close up view to see Amelia holding the letter and putting it back in the envelope. At the end of this shot, I thought it would be cool to move the camera around and zoom in on to the letter. This impulse was a really good directing choice and gave a perfect ending to my film. I then filmed a close up shot of Amelia’s face to get her feelings and emotions. I got her to perform the actions of reading, putting the letter in the envelope, kissing it and walking away. I would then cut her expression in-between shots of the letter itself.

It was brilliant working with an actor as the timing and pauses Poppy made for Amelia were perfect and we all really felt we were on a set during this final scene. Adding to this feeling was Stuckey who amazingly helped with lighting, he lit the letter and Poppy’s face during the final two shots using a lamp. I shot everything either straight on or over Amelia’s left shoulder, so the camera wouldn’t be jumping to different sides of her body in the edit. This would make the final video feel natural and smooth. I did the best with what I had and the time I had to do it in and I’m happy with the final footage. 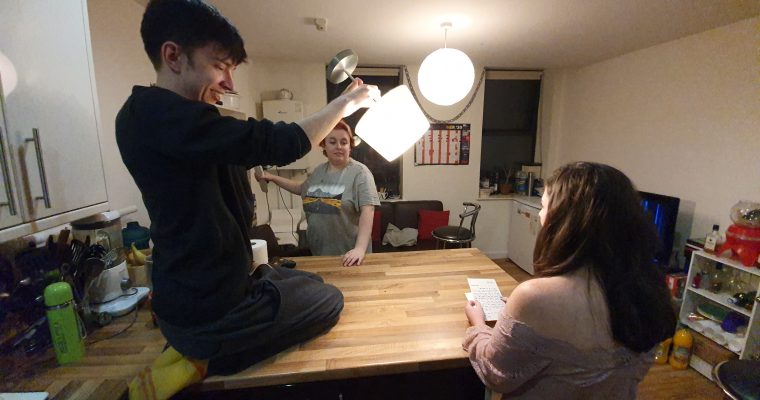 I edited my video using Final Cut Pro X and ordered my footage into chronological script order, then cut it together in a way that I felt best represented the graphics and story. For the music, I didn’t want something upbeat or sad. I wanted a hopeful piece as although Amelia was planning to leave, it was for a better life and opportunity. I found a royalty free track called “Happy Dream – Piano with Strings”, which started out with a solitary sounding piano, giving a sense of loneliness, then built into a much fuller orchestral piece full of hope. It had a steady beat which I cut some of my shot transitions to and this worked very nicely. I then cut in foley sounds of magazine pages turning, sketching on paper, passport page flicking, letter folding etc.. to give my graphics and auditory element as well was visual. I kept the sounds subtle so as not to sound fake.

I gave my film a beginning title card. I called it “Amelia, A Short Film Using Graphic Props”, then book ended it by having a credits page at the end which contained the names of the cast and crew and our roles. It also included a list of the graphic props themselves. I then gave my footage a slightly gritty overlay to subtly suggest the age of the story. I then exported my 3 minute film. I also decided to make a shorter cut of the video as a teaser trailer using some final video footage and a piece of two of previously unused material too. I even used a different piece of music for this trailer and the final cut came out at just 44s. I released it a short while before the full cut of the story. 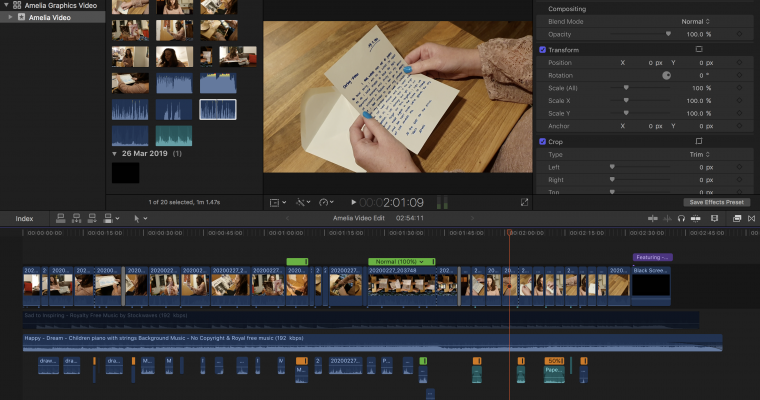 I’m very happy with both edits of my film and I think it shows off my graphics well, as well as being an entertaining story. It was fun to film and I’m so lucky to have acting and design friends with lots of experience who I could collaborate with.