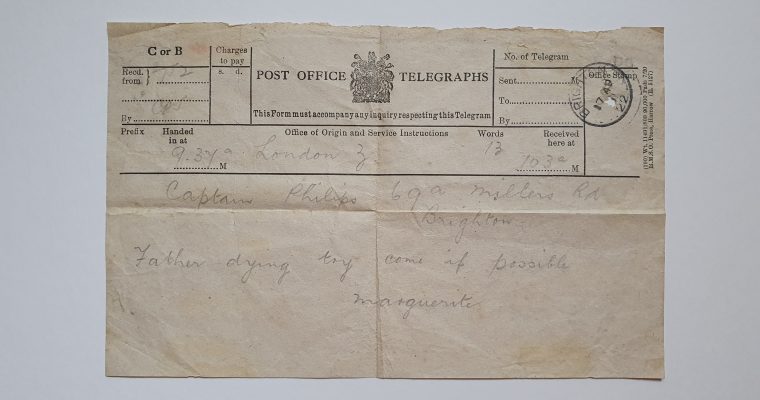 What a dreadful message to receive. I acquired this in late 2019 and although it’s very dramatic and sad, this telegram is a great example of how this form of communication was used in the late 19th and early 20th century. Telegrams were sent with congratulations or urgent news and always short in length as the sender was charged by the word. This whole telegram consists of 13 words as the recipient’s address, who in this case lived in Brighton, was also always included in the word count.

Much like texting on a pay as-you-go sim, telegrams, being charged by the word meant if it wasn’t wholly important to the context of the message, words and punctuation could be omitted to save money. Here Marguerite has used no punctuation at all and even completely left out the word ‘to’ which should sit in between “try come”, but as no real meaning is lost you can see why she saved herself the extra cost. 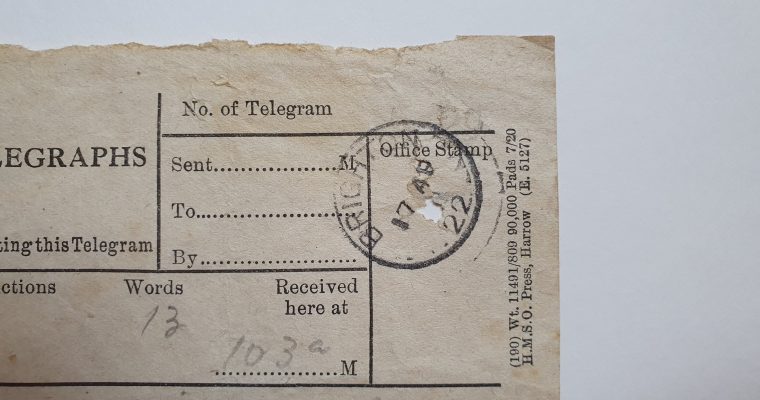 This telegram was sent from the London office and received on 17th April 1922 in Brighton, as seen by the stamp in the top right corner. You can’t help feeling sorry for Marguerite who would have sent the telegram in such guilt and haste as in this moment she was would be trying to come to terms with the fact there was nothing more she could do to save her father but have the courage to write this message, sending for a beloved family member to come and comfort him and give her brother, Captain Philips, who would soon open the news he would be dreading to receive, most likely knowing what the telegram contained before he even opened it, one last chance to see this father before he died.

It might be 98 years since this telegram was sent but the timeless, human feeling of loosing someone you love means it’s just as easy to empathise with these siblings now, as it would have been in 1922. It’s amazing how Marguerite’s message, written on a simple piece of paper a century ago can impact on an unrelated human’s emotions 100 years later.

I love personal stories and this ephemeral telegram is a lovely example of human feeling transcending a century and I treasure it for that. There’s no saying exactly how this message was intended or whether this is how everyone involved in this telegram was feeling at the time, but it’s fun to think and it’s likely a close guess.

Objectively, this is also a prime example of a telegram of its time, from the texture and weight of the paperstock  to its warn edges and aged tone, it will be a useful reference for the future I’m sure. I hope to be able to convey the same amount of emotion this simple piece of paper does when designing my own telegrams for prop making work.

Post Views: 571
Author: samuel thomas
Filed Under: From My Collection